I was at college in Reading in the early/mid eighties. I was never seen without a CND badge (even by my boyfriend) so my support for the Women’s Peace Camp was assumed. A local woman told me that she was part of the support network for the Camp ~ organising fund-raisers, collecting and delivering “red cross parcels” and helping to organise a (hopefully) big demonstration. We didn’t have the internet or even mobile phones; our mail was routinely tampered with and we couldn’t be sure that anything said on the telephone was a private conversation so it wasn’t easy. We had let sympathetic people and organisations know that we were planning to “Embrace the Base” on a particular day. After that, all we could do was wait & hope.

“I know we probably won’t get enough women to encircle the whole base,” my friend said “but if there’s more than a couple of dozen of us ~ enough to make a symbolic demonstration ~ maybe the Press will, at least, cover it. They won’t like us but they might not ignore us.”

On the day, I was about to set off for the demo when my Mum arrived with some apples from her tree for me. I told her why I couldn’t stop and offer her a cuppa. She said “I hope you’re wrapped up warm. There’s always a lot of standing around at these things and it can get cold.” My best friend ~ a lad called Bob ~ said 2 things that have remained with me. Firstly “you are my representative there” and then “Remember; if protest never achieved anything, you wouldn’t have the vote and we’d all still be drinking fizzy beer!”

Of course, women kept arriving by the coach-load. Some who came and stood with us had come over from Belgium. Messages were passed by word-of-mouth around the fence and, just to test whether there really was anybody across the other side, we started up a whooping (belly dancers have a special name for it) Our sisters across the Common whooped back to us and we knew that we’d done it ~ there were enough of us to encircle the entire Base. But, what was this? Women were still coming. Lines formed behind lines and we were all full of such joy and a sense of our own strength in unity.

That day remains one of the most exhilarating of a life which has not let up one jot in the intervening years.

Sonita (15) Sonita follows a headstrong Afghan rapper, a teenage refugee living in Iran, caught between her dreams and her reality in …

Pussy Riot: A Punk Prayer The incredible story of 3 young women on trial in a case that gripped the world
View more less 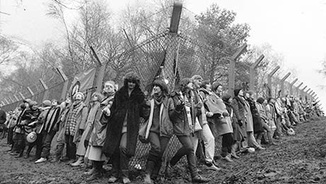