The inspiration for making the film was a poster campaign raising public awareness in Norwich, starting in August 2013. Ad-busters, Occupy, Uncut and other pro- sociaI movements in Latin America and Europe are also inspirations. I want to not be crushed by poverty and isolation. I felt like a cat in a bag being drowned when I was sanctioned. I couldn't breath properly, I felt that society didn't want or need me and it made me feel furious and scared. The posters are my claw marks on the walls. I felt that the restrictions placed on my behaviour as a female were no longer applicable. I felt excluded from everything as I had no money, and seeing the posters gives me a feeling of exisiting. It feels that the 80s' feminism I grew up with is redundant in the face of a tide of domestic abuse, sex crimes, homelessness and poverty wages. The most needy bearing the brunt of being lacerated by a million cuts. The whole country seems so divided about everything and the relentless march of greed is churning us into muddy compliance and setting neighbour on neighbour. The point of the film is to bring hope and raise a smile, start parents talking to their kids about politics and social issues and how they affect us all. I'd love to hear more personal stories about how people cope with this total economic onslaught on people and public serivces, by elected public servants.

Made using Premier Elements and Audacity. Shot on Canon Ixus 145.

He Named Me Malala plus Q&A Introduction and Q&A with Arifa Nasim, UK Youth Delegate to the UN 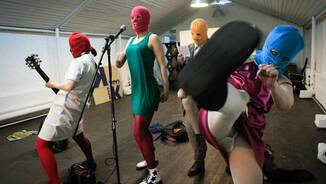 In 2012, three women activists performed a 40 second "punk prayer" inside Russia's main cathedral. They were arrested on charges of religious hatred and entered a trial that reverberated around the world and transformed the face of Russian society forever.

Get involved in The Time Is Now communicate, participate, agitate! Contribute now!