Reel Equality Film Club presents the hit film Made in Dagenham: an inspiring story of the 850 Ford women car workers who held a successful strike in 1968 against unequal pay. A salute to working women standing up against the male-dominated corporate machine, Made in Dagenham is a quietly radical film packed full of comedy, heart and great sixties style.

Prominent working-class activist and academic Dr Lisa McKenzie joins Reel Equality to talk about her fight against inequality and what it means to stand up for the people and places you believe in.

Lisa is a sociologist at the London School of Economics and lived on the St Ann's estate in Nottingham for more than 20 years. She tells the stories of its residents in her unique book Getting by: Estates, Class and Culture in Austerity Britain. St Ann's has been stigmatised as a place where gangs, guns, drugs, single mothers, and those unwilling or unable to make something of their lives live. Yet, in this community, we find strong, resourceful, ambitious people.

“Someone has to talk about class politics… and the social cleansing in our country on the political stage, someone who has lived it, knows it and feels it. That someone is me, I have lived on council estates all of my life, and I am a proud working-class woman.”

Made in Dagenham Uplifting story of fight for equal pay 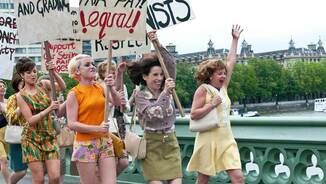 An inspirational, feel-good film about the fight for equal pay - Made in Dagenham is set during the successful strike by 187 women car workers in the Ford Dagenham factory in 1968. Working in extremely impoverished conditions and for long arduous hours, the women finally lay down their tools when they are reclassified as "unskilled". In a protest that eventually leads to the Equal Pay Act; they take on their corporate paymasters, an increasingly belligerent local community, and finally the male-dominated House of Commons itself.