Ten-year-old Wadjda wants to buy a beautiful green bicycle but her mother forbids it, afraid of repercussions in a closed society. The spirited Wadjda sets out to raise the money herself. Clearly underpinned by its representation of a society which is very restrictive for women, this charming film offers a positive view of one girl’s determination to be different. As one of the first films to come out of Saudi Arabia and the first to be directed by a woman, Wadjda is as important as it is enjoyable and should be treasured the world over.

Offside An intelligent, funny satire on culture and the position of women 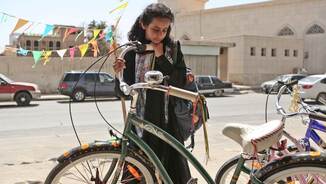 Growing up in Saudi Arabia, independent 10 year old Wadjda wants to wear trainers, listen to rock music and most importantly to ride a bike. Shot entirely in Saudi Arabia this is the first feature-length movie made by a female Saudi director.