The Cost of Ethics, The Price of Life Intervening for Sonita

“All Afghan girls have a price.”

“All Afghan girls have a price.” These words are uttered with exasperation, by an Iranian woman working in a community centre, but there is also defeat and acceptance in her voice: this is a problem that cannot be solved.

Sonita is a remarkable story of one girl’s talent and determination, but it’s also a documentary film with a self-fulfilling prophecy about the cost of an Afghan girls’ life. For Sonita to escape her fate as a child bride, someone has to pay a price.

Iranian documentary filmmaker, Rokhsareh Ghaem Maghami, chose Sonita as her subject because of her talent as well as her situation. She is an Afghan refugee living in Tehran, cleaning in a community centre, but she is also dreaming of a world famous career as a political rap artist. Her family, impoverished and stuck in a cycle of oppression they call “tradition”, are willing to sell their daughter to raise the $9,000 it will cost to buy their son a bride. The cycle persists because it’s bigger than one person. But even though one person can’t stop it all, one person can intervene.

What does it really mean to intervene?

In a recent episode of This American Life, “Don’t Have to Live Like a Refugee”, reporter Sean Cole does exactly that, the thing that investigative journalists and documentarians are not supposed to do. He gives a hundred euros of his own money to help a refugee who is the subject of his story. In the edited podcast, he says,

We had heard that driving refugees around could get you in trouble with the police. There was no way we were going to do that. But then I did do something that I'm not proud of, something that, if I had thought about it a little more, I would not have done. In the next moment I heard myself say, maybe I can get him some money for a taxi. Reporters aren't supposed to get involved like this in their stories. We're supposed to observe, not intervene. Looking back, it was a mistake. But in that moment, every reason I could think of not to help them seemed small, and almost cruel.

With hindsight, Cole wishes he didn’t intervene. But what he did - the amount he paid and what he enabled – are much smaller when compared with what Ghaem Maghami was faced with: paying to emancipate a minor.

On the one hand, a case can be made for the intervention: while Ghaem Maghami stands accused of breaking documentary ethics for intervening, doing nothing would violate her morals. On the other hand, a case be made that no ethics were broken to begin with: documentary ethics are a useful code, but human rights are also at stake.

Bill Nichols, renowned documentary theorist, questions, in an article for the IDA (International Documentary Association), what ethical standards are and who enforces them,

A code of documentary ethics must focus on protecting the well-being of both film subjects and actual viewers. In each case an ethical code needs to give primacy to respecting subjects and viewers as autonomous human beings whose relationship to the filmmaker is not limited to or solely governed by a formal contractual relationship. An ethical code of documentary practice allows us to address the imbalance of power that often arises between filmmakers and both their subjects and their audience. It affirms, among other things, the principle of informed consent for subjects, inflected to acknowledge that documentary filmmaking is more of an artistic practice than a scientific experiment.

Ghaem Maghami neither obstructs, nor impedes, the humanity of her subject – on the contrary – nor does she compromise or exploit the trust she’s built with the viewer.

Still, there could never be a balance of power between Sonita and Ghaem Maghami. Sonita, when the documentary filming begins, is a minor and she has no identity papers which means she can’t even go to school in Iran. She lives in a sort of segregation because of her inability to participate in these integral aspects of Iranian teenage life and, after facing the trauma of having fled the Taliban in Afghanistan, as a child, is now faced with being sold by her family to a complete stranger. Ghaem Maghami, though there are restrictions on filmmaking in Iran, is free.

Ghaem Maghami knew what she was doing and, unlike Cole from This American Life, she is proud of her actions, and most certainly does not regret them. In a recent interview for The Guardian, Ghaem Maghami told Homa Khaleeli,

I can’t film people who are suffering for something I can afford, when they are giving their life, their story, to me… You are never a fly on the wall. You are always an elephant in the room. You change everything with your presence. I don’t believe objectivity is important, or even happens. Human stories are always subjective and personal. The film-maker decides, creates.

So when the women at the community centre say they cannot help Sonita – they take care of 160 children and paying thousands of dollars to assist one of those children is simply not viable – Ghaem Maghami realises that she is the only person who can. Though it is her choice, it is also a responsibility – to Sonita, and to the humanity of her viewers. Could we watch the same film if it ended differently, with Sonita being sold to a stranger as his child bride, knowing that money and the person documenting the sale could have stopped it?

For Ghaem Maghami, it is simple, “Anything to stop them taking her,” she says.

“Anything to stop them taking her.”

Her decision to intervene, though problematic, is also at the crux of the humanity and heart of the film. While, for the viewer, there is uncertainty over the ‘truth’ of certain claims; whether Sonita is really in immediate danger, if her family are trying to extort money from the filmmaker and if the filmmaker is glorifying her own humanitarian act, it is still remarkable and deeply moving to watch.

Whatever the ‘truth’, and whatever that means for filmmaking, Ghaem Maghami succeeds in showing us what she is doing, how she is doing it, why she is doing it and what is at stake. Though technicalities about ethics come into question, there is an awkward transparency to this film that eclipses the so-called rules and maintains her ethics insofar as they pertain to trust and respect for Sonita and the audience. We, as viewers, are not implicit in her actions, but we do have to think about what we would do, and, more importantly, what we can do, after the credits roll. Not every girl in Sonita’s position will be so lucky. Not everyone has a documentary made about their fight for freedom, and it is far fewer for whom that documentary will become the triumphant tool.

For more information on the fight to end child marriage, head here: www.girlsnotbrides.org

What does ‘Sonita’ mean? It’s a swallow, a migrant bird. 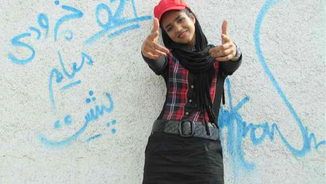