International Women's Day has been observed since in the early 1900's, a time of great expansion and turbulence in the industrialized world that saw booming population growth and the rise of radical ideologies. We mark IWD this year with a screening of this powerful documentary and a panel discussion. Our city has a huge student population, their safety is all or ours business and responsibility. Join us to discuss issues raised in the film and how we might improve the situation right here in our own city.

Excited at having landed a place at the University of North Carolina, Annie Clark's elation evaporated when she was raped before classes began. She is far from alone: studies show that 20% of women will suffer a sexual attack at university. In a masterful, wide-ranging investigation, Kirby Dick and Amy Ziering present dozens of testimonials detailing how universities of every shape and size collude to cover up sexual crimes on their campuses, creating an ideal "hunting ground" for serial offenders. Fear of damaging their reputation - and enrolment - drives shocking behaviour throughout the universities, with the fraternity and athletic communities covering up the most grievous assaults. For many victims, the institutional denial proves even more painful than the crime itself. But hope is in sight as Annie and other victims begin to fight back through the courts, hitting universities where it hurts - by threatening their revenue streams.

The Hunting Ground a startling exposé of rape crimes on U.S. campuses, institutional cover-ups and the brutal social toll on victims

The Time is Now: He Named Me Malala Presented by ICE and i4P

BAKING BREAD FOR PEACE WITH GREENHAM GRANNY: An interview with Caroline Goldie 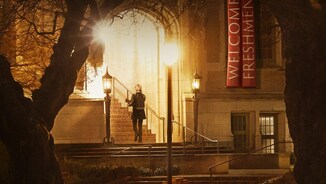 University rape-culture comes under the microscope and under pressure here as brave and inspiring women take on the US universities and force them to take notice.