A wonderful insight into Gurinder Chadha's (director of Bend it like Beckham amongst many other accolades) background and some of the challenges she faced as a first generation female immigrant, accompanied with her favourite musical selections. Born in Kenya to Sikh parents, Gurinder then grew up in Southall in West London.

Gurinder takes you on a wonderful journey of traditional Indian folk songs from her parents background through to the likes of The Clash that was part of the soundtrack to her teenage years, as she found her political feet in a society dealing with the rise of the National Front and attending events like Rock Against Racism. At the same time talking about the life events that drove her to become the successful film director that Gurinder has become. 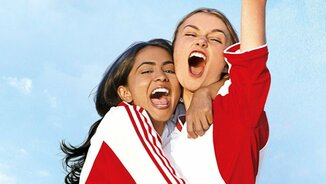 Jesminder, the daughter of a Punjabi-Sikh Indian couple from Hounslow - wants something more than the life already carved out for her – and her heart is set on football. A comedy about fitting in, standing out and bending all the rules!