A Vice interview with Kitty Green, Director of "Ukraine is not a brothel" Interesting insight into Kitty Green's experience of documenting feminist group Femen

An interesting insight into the somewhat ironic world that lay behind the roots of the feminist group Femen in Ukraine.

The film, "FEMEN: Ukraine is not a brothel" is being shown as part of The Time Is Now season at Stoke Film Theatre.

This Vice interview with Kitty Green reveals the role that Victor Svyatski had in the group's formation and their rise to global visibility; but also the desire for the group to shake themselves from under his control.

Vice talks to Kitty Green about filming her documentary on Femen.

View the "Femen: Ukraine is not a brothel" trailer here:

Femen: Ukraine is not a brothel 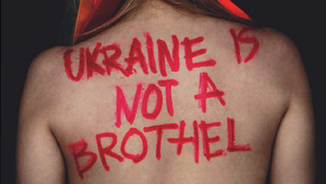